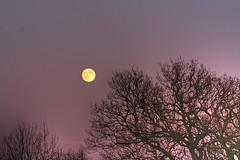 So I’ve been playing this little prank on my next door neighbor for the past couple of years. Basically, I take a big ol’ dump on her front porch every time there’s a full moon. It started out as just being a drunken dare, but when she asked me about it the next day I told her that the same thing happened to me. As the weeks went on I convinced her that I’d done some research and that said droppings were made by a quasi-mythical creature and they were actually good luck. She suffers from senile dementia, so she’s fairly convinced that this is true. (I think she’s started collecting the droppings and using them for whatever.)

Anyhoos– here’s the gig. I’m going to be on vacation come next full moon, so I need someone to fill in for me. To be consistent, you can’t eat anything but bananas and sunflower seeds for at least three days before leaving said droppings. She’s usually in bed by 8 p.m. but I usually wait until at least midnight to leave my load in case any neighbors are out and about.

I’d really appreciate it if someone could help me out. As your reward, I’ll give you $50 up front and all the bananas you think you’ll need. I’ll need evidence that you actually pulled it off, so take a camera or put something on youtube so I know you’re not full of shit (anymore). Once I’ve got solid proof, I’ll throw in another $50.