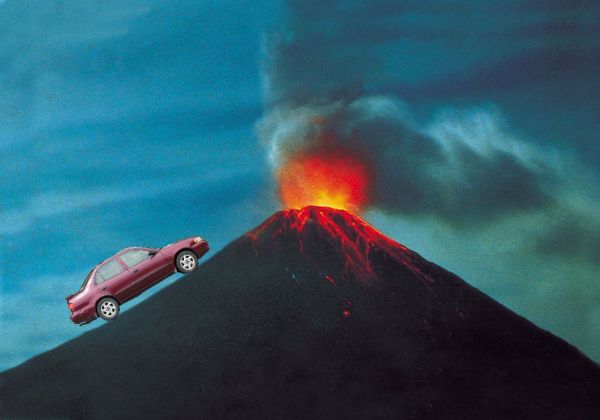 This is an actual car add for a vehicle I’m selling to help with bills. Vehicle is located across from Silver Beach Grocery. Contact David @ 402-XXX-XXXX for more details. Thanks!

1996:
-Chess computer “Deep Blue” defeats world chess champion Garry Kasparov for the first time. Computers go on to beat me at everything, all the time.

-The year that humanity set their differences aside and dedicated all their resources to engineering the magnum opus of automobile design: The 1996 Toyota Corolla Plus. . .and then painted it a sweet ass candy apple red color so it’d be totally camouflaged when its parked on a volcano. That’s right, a VOLCANO.

What’s that you say? 96 Corolla? Yeah, I know what you’re thinking but before you go and move on to browsing lowered Civics (click on “Everett” at the top, creep) or tractors (Sedro-Wolley is thataway, dimwit) let me point out that this isn’t your mom’s 96 Corolla. . .it’s my mom’s ‘Rolla – and that lady is hardcore. So hardcore that she doesn’t give a crap about driving in snow.

This car has seen all of it, man. Roughly 254,000 miles worth of it and didn’t blink an eye. This car stared death in the face every time I slid the key down my arm, guided it into the ignition with my finger, closed one eye, and took off down the road — and it made it through every time. It survived because it’s a fighter and it handles like a dream. The super-geniuses who post over at Edmunds.com give this car 4.5 out of 5 stars, and those guys know what they’re talking about because they post about it on the internet.

And guess what: Because this sweet ride was built during the era of awesomeness, it includes a combination ashtray/change/ cup holder. For those of you considering buying a lame new car, let me point out that those only come with change holders. What are you, a poor person? Do you need to hold onto your change? No, you need to throw it at the homeless while you have sex in this awesome car.

I’d go into more boring details about the engine and stuff, but I’d have to look it up. The car’s maintained but it’s from 1996 and, statistically, the majority of things that were around in ’96 are either dying or expected to die soon. Scientists agree that the ‘Rolla is probably an exception to this rule. Probably.

Because I don’t want to bore you facts and numbers here, I’m just going to let you get back to me with any questions you may have about this mofo. In the meantime, I’ve gone ahead and answered what I assume will be frequently asked questions below:

Q: Will this car get me girls?
A: Hells yes. And don’t mean it’ll do it all passive-aggressive “look-at-me” style either: The ‘Rolla is an in-your-face type of car and this mother will actually physically go and get you some tail. Being a total wuss and decided to go to work on a Monday? Guess what? ‘Rolla don’t play that game and ‘Rolla may just decide you need some tail while you’re taking your shower and making your coffee. BAM! Get out to your driveway and see your car stacked with totally willing girls ranging from 7’s-10’s on the scale. Big meeting you can’t miss about the Henderson account? That’s cool, but ‘Rolla is probably going to inquire as to when you plan on telling your parents that you’re a homo. What, you are a homo? That’s alright, ‘Rolla is from the 90’s: ‘Rolla don’t judge. What, you’re an orphan and don’t have parents? Oh hey: Looks like you have that role model you’ve always wanted: A badass 1996 Toyota Corolla that totally WILL beat the crap out of all the other kid’s pansy dads.

Q: Will this car make me a better person.
A: No, this car isn’t for you. This car will fucking eat you alive. Go buy a bike.

Q: Is this car a good investment?
A: ‘Rolla was raised cruising the lanes of I-5. Hell, ‘Rolla RAN the lanes of I-5 If you’re smart, the first thing you’ll do once you get your hands on this sweet ride is take a Shop Vac to it and recoup your investment from the remnants of diamond dust trapped in the seats

Q: Manual or Automatic transmission?
A: Automatic. But don’t go thinking you’re going to be living life in easy mode like some fat cat One Percenter down on Wall Street – this is advanced automatic. You know how driving gets boring sometimes? Cherish it, it’s about to go out the window. The light that on the gear selector is stuck in slow-mo strobe mode and you’ll spend at least half your time wondering if you’re in forward or reverse. If you love a life of boredom and stability, I’m sure a simple mod with a screwdriver and bulb could fix this; I don’t know, I was always too busy living life on the edge and being the center of attention in any parking lot to care.

Q: How much trunk room are we looking at here?
A: Trunk will fit 7.3 metric children. Less if you need to store your clown suit and candy in there.

Q: Is the car child friendly?
A: Did you not see the kid in the back of the trunk?

Q: Is there a reason the car is wearing an eye patch, pirate hat and hook? I don’t know if I trust it. . .
A: Is there a reason I have the body of a god? No, it just looks freaking awesome. Also, there may be a broken turn signal indicator housing. Or two. Whatever, chicks dig scars. 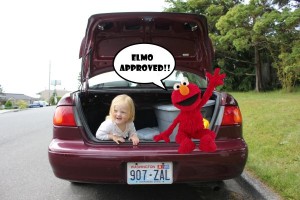 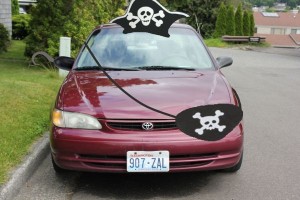