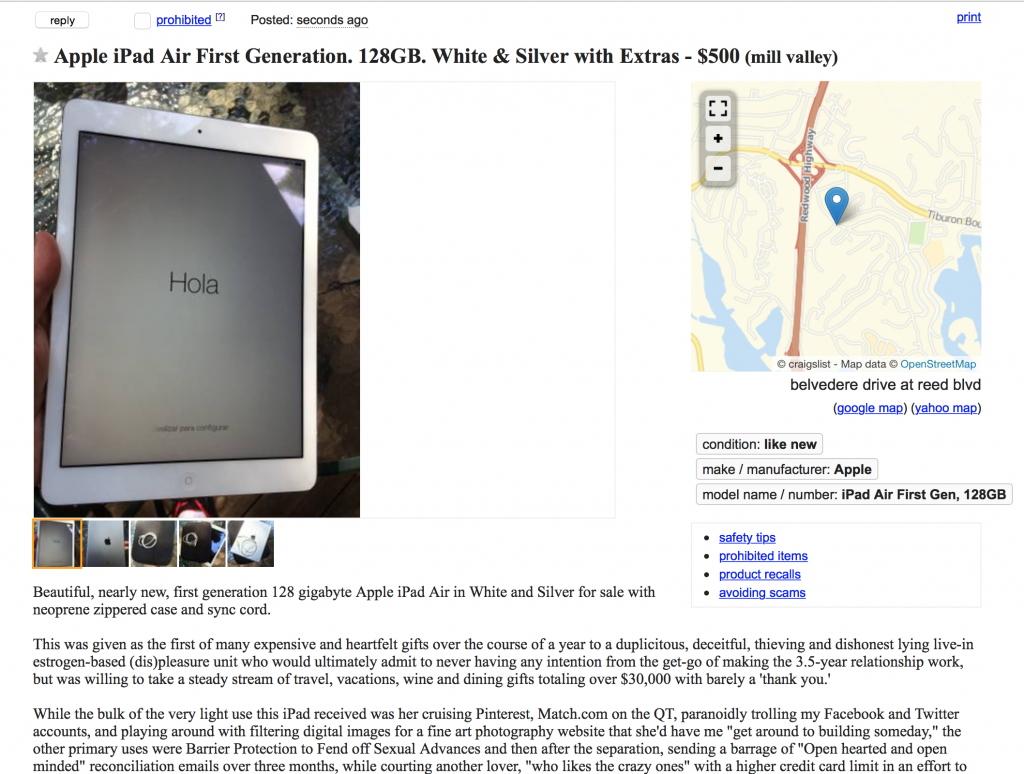 This was given as the first of many expensive and heartfelt gifts over the course of a year to a duplicitous, deceitful, thieving and dishonest lying live-in estrogen-based (dis)pleasure unit who would ultimately admit to never having any intention from the get-go of making the 3.5-year relationship work, but was willing to take a steady stream of travel, vacations, wine and dining gifts totaling over $30,000 with barely a ‘thank you.’

While the bulk of the very light use this iPad received was her cruising Pinterest, Match.com on the QT, paranoidly trolling my Facebook and Twitter accounts, and playing around with filtering digital images for a fine art photography website that she’d have me “get around to building someday,” the other primary uses were Barrier Protection to Fend off Sexual Advances and then after the separation, sending a barrage of “Open hearted and open minded” reconciliation emails over three months, while courting another lover, “who likes the crazy ones,” with possibly a higher credit card limit in an effort to see which one of us would become ensnared first.

Taking into account she’s now his favorite ‘#2,’ I doubt any future windfalls will be as impressive as she hopes, such as that iPhone 6+ she probably wants now that she’s without her iPad, since I got it back in an effort to recoup some of my money, with the rest of my possessions.

The iPad has been cleared of all previous data and factory reset. Her utter and intentional technophobic cluelessness prevented it from being synced or backed-up to her laptop for about a year, so I am assuming the new guy, “John,” did it for her.

Therefore, since both of them handled this, what will be a, delightful digital device in your possession, dear potential purchaser, I made sure to carefully and thoroughly sanitize it with a concentrate of Witch Hazel, Hydrogen Peroxide, Windex and liquefied Valtrex, buffing it to a high gloss with a brand new ShamWow cloth to insure no nasty aftertaste of sloppy seconds.

In addition, the local Catholic Priest blessed it with Holy Water and the eldest and most senior monk at my Buddhist temple smudged it with Sage in a beautiful holistic ‘Space Clearing’ ceremony to ensure the hard drive is purged of bad karma and diseased digital artifacts. An Islamic friend introduced me to a Mufti who laid hands on it and insures his Fatwā is a spiritual Apple Care Contract, but that’s probably not going to be recognized as authorized Warranty Coverage, Godforbid (and I put my effort into the Godforbid part, trust me), it should require service in the future.