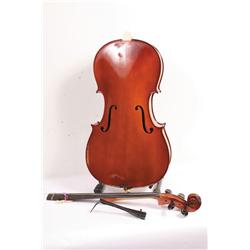 So my sister gave me this cello a couple years ago. It’s a nice cello. Actually, it’s a great cello. It’s probably the best cello, but I don’t really know much about cellos. Also the neck snapped off. Of the cello. So it’s really more like 3/4’s of a cello, but the other 1/4’s still there, it’s just not attached. It’s kind of like you’re getting two cellos, only one of them doesn’t have a body and the other doesn’t have a neck. But if you stand them up next to each other it’s like old times. You could probably fix it with like some music glue or something like that.

She also gave me a cello bag that I can give to you too, now that I won’t have a cello. It’s a really nice cello bag. You can fit everything in it. Actually, there might even be a bow in the bag, I’m not sure. I don’t want you to think that there’s 100% a bow in the bag. It’s way over there, I can’t check right now. But if it’s in there it’s yours.

If you’re like me and you don’t know how to play the cello then you could use it as a coin bank. It’s hollow and there are two S’s on the front that you could drop the coins through. Then when it’s filled up you could drop it off of your roof or carry it around like a change purse. Ooh, in the cello bag. It’d be like a cello purse. I’d do it but I’m moving across the country and it won’t fit in my car. What else could you do with it. You could saw the front off and use it as a sled. Or give the neck to a baby as like a wizard stick for Christmas. Totally give this cello to someone for Christmas. Or Hanukkah.

Please come get it. I’m in Echo Park. I’d actually go somewhere to meet you if wherever we’re going is a cool place. Like the desert or something.