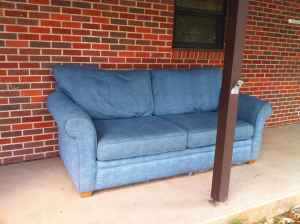 What kind of couch? I don’t know, I’m not a couch scientist. What I am though is a manly guy looking to sell his manly couch.

I bought this couch for 300 dollars from a retired mercenary that fought in both World War l and World War ll and had his right arm bitten off by a shark in the Philippines while stationed there as a shark handler. When he sold it to me I had to arm wrestle him for the honor to buy it. I broke his arm in 7 places when I did. He was so impressed with me he offered this couch and his job here at Sheppard AFB to me. Needless to say, I did take the job and the couch. The jokes on him, I’m now selling the couch. (I still have the job)

This couch is just too awesome for me, I was forced to buy another. I tried to move this couch to another room but it doesn’t fit through the doors. So you may have to take some doors off the hinges or find out a way to bend space/time to get it onto your place. I’m in a standard government-issue house in Freedom Estates so it’ll probably fit fine into your living room if you’re here at Sheppard AFB.

I’m hoping to find a good home for this couch, so ex-shark handlers need apply. If not it can go to anyone in the area with a need for an awesome, manly couch.

*All images in this ad are original and were included in the original Craigslist post.