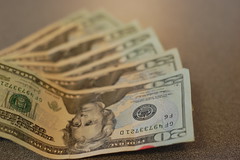 I just moved and sold a whole bunch of stuff, which has been very satisfying, except that now I’ve got all this cash. Mostly twenties, except for a few fives and a couple ones. I assume the money originated in ATM machines, just because of the preponderance of twenties which I’ve received in bulk (in envelopes mostly, though one stack in exchange for my washer/dryer was paper clipped) though I couldn’t tell you which ones came together anymore.

There is one “classic” twenty dating from 1993, softly worn over Jackson’s face, creating a boyish, worried look as though someone told him he was no longer going to be printed on the bill because he had done something wrong (as an April Fools).

There are 47 contemporary twenties, which is over $900.

The fives and ones are unexceptional, except that they are worth money.

The items can be used for all sorts of things: buying food or clothing in stores, snorting cocaine, acquiring cocaine, stretching leather, exercising willpower, bribing, hushing, during sex or for sex (I have not done this though I don’t know what the buyers of my belongings did, I didn’t ask, though they seemed like normal type people, but who knows…), tipping and/or looking rich, and more!

I am willing to separate the bills. If you’re looking for a little bit more, I could potentially get some, though I am running low on things I’m willing to sell. The cash is AS IS; I assume it’s authentic because I already took it from someone else, but I haven’t taken it to a bank. Some bills are worn more than others, most are in good shape. They smell ok and appear clean. I’m not a money collector (obviously) so there may be some finds!

What I am looking for:

a used dish rack (I don’t want a new one because I know someone else must be getting rid of one that’s still perfectly good), preferably white, with a matching mat
a used drawer organizer for silverware (ditto), not plastic, no color preference
an old telephone, I’m picturing 70’s-80’s era, red
mismatched country-style kitchen chairs
a wooden desk, preferably the color of the table that the cash is on (see pics)
good music (vinyl or CDs), especially Smashing Pumpkins Siamese Dream or Camera Obscura’s My Maudlin Career
a wooden rocking chair, not too wide in the seat
house plants, bigger
a really cool beaded curtain, preferably wood
something that I don’t know that I want
I don’t do drugs, sorry, but thanks for thinking of me