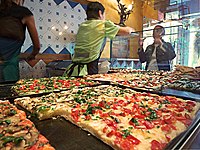 Having taken pizza orders for delivery for many seasons, I think there are a few things that people should know before they call to order a pizza for delivery.

1. YES WE MAKE A CHEESE PIZZA! No pizza joint in the world would refuse that request. No, you don’t have to be embarrassed because you’re ordering what a typical 5-year old likes to eat. No, you don’t have to say “Do you make a pizza without any topppings? I mean, like, uh, just with cheese-only… and sauce?” Every pizza has cheese on it, unless you’re a freakin’ vegan, and no one is staying in business by offering dough-and-sauce-only treats. So, yes, no matter what pizza place you call WE MAKE A CHEESE PIZZA. Even if the menu says “The Classic” or “Basic” or whatever, if you say cheese-pizza we know what it is.

2. KNOW YOUR ADDRESS! Don’t giggle, you overpaid salaried- MBA reading this during your lunch-hour. YOU are the IDIOT that calls and says “We just moved. It’s by the store on the corner.” Really? Thank goodness there is only one store on a corner in all of Washington State. For a moment, I thought I might actually have to look on a map to see where you live or verifiy the northeastern part of this town or the west side of the next city. Oh, and when I politely mention that I need an exact address, don’t huff and act like I’M the one making things difficult. Find a piece of mail. Look on your lease or morgage papers. Go outside. You DO have an address, contrary to the nameless customer who insisted “they” took his address away (but he’s got other problems).

3. NO, I WILL NOT BE THE PERSON WHO DELIVERS YOUR PIZZA. Yes, I know. I’m a girl. You’re a boy, maybe even cute. I have a pleasant phone voice, which is why I was hired for this job. I don’t care how wild the party is. I don’t care that the parental units have left for the weekend. I don’t care that you will tip me $20 just to show up. I’m being nice to you because it’s my job, not because I’m trying to get a boy-friend. Also, although I’m not in this boat, just beware that not everyone who sounds like a pretty model is. Ever see the movie “Spun” ?

4. WE WON’T ATTEMPT TO DEFY THE LAWS OF THE PHYSICAL WORLD FOR YOU. Grow up, miss “I want it extra-well done – but not burnt!” Really? What the fuck do you mean? Extra-well done by definition IS burned. Would you like it simply well-done with an extra paranoid note to the kitchen not to burn it? No? You specifically want it to be EXTRA well-done and NOT BURNT! The other annoying request is for “one” side of the pizza to be well done, and the other “lightly-baked.” Um, sir, you do understand what a pizza is, right? That the whole pie will go in the oven and both sides of the pie will be cooked the same amount? We haven’t entered into the Star Trek technology of a half-burned, half-soggy pie yet, but we will certainly send you some coupons when we do. Shall I put down “golden brown” for now? Sound good? You mean like, NORMAL?

5. DO YOU LOVE YOUR CHILDREN? I think most of you do not. I hope you understand that when you leave your children in the care of a baby-sitter you should make sure that she/he knows the address where the kids live at, god forbid an EMERGENCY happens. Also, knowledge of the household phone-number would be great so that we can actually get ahold of the baby-sitter when we find out that the wrong address we were given will cause us to be a little late. I know. It’s a big romantic night out and you haven’t been laid in months because you haven’t had enough “alone time” together. But write down the address, write down the emergency numbers, write down that your lovey-dovey brat is allergic to mushrooms so that HOPEFULLY those emergency numbers won’t have to be used.

6. A REAL ALLERGY? Look, if you a seriously allergic to something, let me know. We will take extra-precaution. But if you simply don’t like lots of garlic, just tell me so we don’t put extra garlic on the specialty pie – don’t tell me you are allergic and then get pissed off when I am reluctant to send you out a pizza that has tomato sauce on it because all of that sauce will have some garlic in it, you fucker. If you’re so goddamned allergic, you probably shouldn’t be eating that, should you?

7. DIETERS. Just stop it. Pizza is junk-food. Quit saying double-extra cheese and pepperoni and in the same breath say you’re on a diet and do we have a thinner, whole-wheat crust? It’s not going to work, baby. You’re fat. You’re going to get fatter. The quickest way to not be fat is to eat LESS and move MORE. So, why don’t you take a walk down to where we are, order a green salad with no dressing OR go all out and order some extra sausage on that pie as well, HEAVY on the olive-oil basting.

8. STONERS ARE THE BEST. I love stoners. I didn’t fully realize what a wonderful contribution they are to society until I started working here. If YOU, dear surfer-boy stoner showed up here after a long shift, I would marry you. You guys are so grateful for anything because you’re soooo hungry. You are just amazed that a delivery kitchen delivers, that a pizza place makes pizza, and that we can even throw pepperoni on that. Half the time, you forget you ordered, so when our delivery guy shows up, it’s like getting to actually SEE Santa filling the Christmas stockings. On a budget? I’ll send you extra coupons. We should all be more like stoners. Sweet. Dude.

9. PARANOID PRICK. Yes, you rude paranoid prick. Watch out. You’re lucky you are insignificant & therfore not worthy of revenge, but I want you to think through this once. IF YOU WERE IMPORTANT ENOUGH FOR THE CIA TO BE AFTER YOU, I THINK YOU WOULD HAVE BETTER THINGS TO DO THAN TO ORDER PIZZA. To the rest of the paranoid pricks who aren’t as delusional about the government, think through this: you’ve been extremely rude to me. I, who know your name, phone number, address and credit card number. I could do a lot of damage. I know it. Now YOU know it. So watch it, because the next person you talk to like that might be a Star Wars nerd who turns to the dark-side.

10. LOVERS. True, I don’t have a significant other, so one might think this was jealousy writing, but it isn’t, I assure you. I know you’re in love. I know “schnookims” probably gives great head, or at least a lot of it, or that “sweetie-pie” just bought you some earrings. Great. But do you realize that incessant dribble on the phone is something I’d rather not hear? You sound like idiots. And to the couples that can’t wait until after copulation to call – TAKE AN ETTIQUETTE CLASS. It is NOT cool to screw during a phone call. Maybe in the 1950’s it was daring, but come on! Not even the mile-high club is that daring anymore.

Will continue to post updates as time goes by….