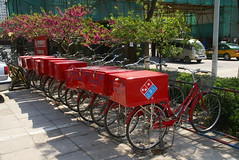 It was cold, it was dark, the roads were a little icy. I don’t blame you for ordering a pizza for delivery tonight. Nice choice.

I’m the lucky one that got the ticket to deliver your pizza. Customer service told you it would be at your door in 30 minutes, I noticed that I was walking out the door with your hot from the oven pizza at the 35 minute mark. That happens sometimes, we get a little behind, especially when Monday Night Football is on.

So I show up at your door about 10 minutes late for the 30 minute promise. You didn’t seem upset by it being late, and the transaction continued. I politely told you the total was $29, you handed me $30, a $20 and a $10. I paused for a second, waiting for the customary “keep the change”, or “thanks, drive safe”, or even a silent shutting of the door. But not from you: you just stood there, not asking for your change, but making it perfectly clear that you were waiting for something. So I said, “Would you like your change?”, to which you didn’t reply, just kept standing there, so I dug into my pocket and found a single dollar bill, which I promptly handed to you. I think the next and last thing I said to you was, “Enjoy your Pizza”, and this is where I was expecting you to finally, mercifully, shut the door and go back to your life and I would go back to mine. But no, you weren’t done yet. If you had been done, I wouldn’t have remembered you, I would have written you off like countless other snobby, cheap people that don’t feel that there is any value added in the act of me driving all the way to your warm, comfortable home so you don’t have to. But you had one final act for me; a smirk, which I roughly translated to mean “I’m better than you, you penny groveling, minimum wage earning scum, you should be thankful that I graced you with my presence at my door for this brief interlude, now go away”

So, young lady that lives in a beautiful home on Eagle River Road not far from Wal-Mart who doesn’t tip the Pizza Guy, I have a few nuggets of information for you to consider before you interact with another delivery driver:

2. If you had waited at the door just a little longer, or asked for it, I would have been happy to give you the penny (your order was in fact 28.99 and I only gave you one dollar back, I still owe you a penny).

4. Most delivery drivers make minimum wage (myself included). I also get $1.50 per delivery from my employer to offset operating expenses of my vehicle. With fuel more than $3/gallon, I can at best expect to break even with this delivery fee. We as delivery drivers actually expect to make the largest portion of our income from our tips. Considering where your beautiful home is in relation to the pizza restaurant in question, I probably lost money delivering your hot, fresh pizza to you tonight.

5. On a given night, I expect to not get a tip on 20% of my deliveries. I find it most interesting that my most generous tippers live in mobile home courts, apartment complexes, and older, more established single family home neighborhoods. Upscale neighborhoods with manicured shrubbery and BMWs in the driveway, not so much.

6. Military members are the exception to this “housing determines tipping” theory. If I see a military sticker in the window of a car in the driveway, I am never disappointed. Apartment or mansion, those who serve a greater cause are very generous to those that serve pizza to their door.

Oh and about the penny that I still owe you. You apparently need the money much more than I do (first and foremost, I’m active duty military, which as everybody knows, pays extremely well. I only deliver pizza for the fun of it, not to make ends meet like you might expect). Please reply to this post and I’ll be happy to personally deliver you one shiny penny.